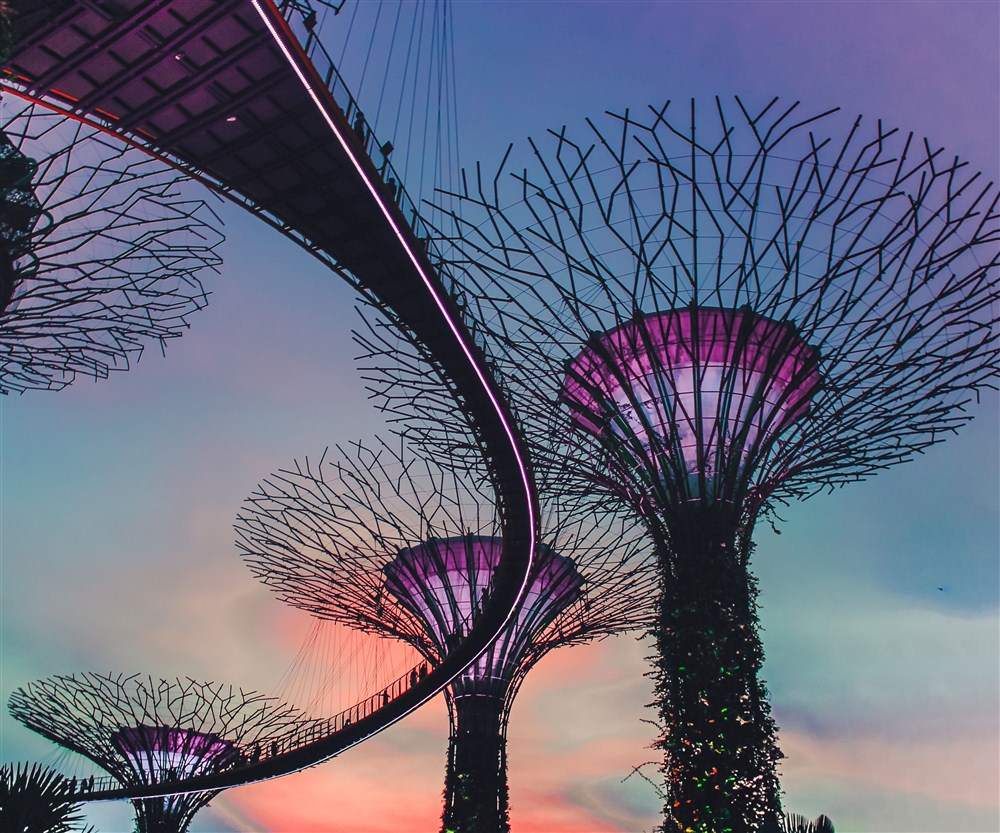 Located adjacent to the equator, Singapore has predominantly tropical weather. However, the abundant rainfall and high temperatures and humidity levels have not deterred it from becoming one of the most preferred travel destinations in the Asian subcontinent. It is located between Indonesia and Malaysia, spanning an area of over 690 sq. km while the coastline is almost 200 km. The landscape is diverse, and you will find a cluster of hills, mangrove swamps, beaches, and rocky soil. Every year, there are thousands of tourist visits Singapore to explore this financially rich and diverse cultured country.  For travelers, Travotic Holidays offers exciting Singapore packages that can save money and help to explore this amazing Asian country.

Tourists overlook the extremities in climate because of the numerous cultural attractions, its thriving nightlife, mesmerizing architecture and amenities. Home to around 5.8 million people, this cosmopolitan city-state is also known for its relatively steep cost of living. You can, however, find better-priced Singapore tour packages at Travotic Holidays.

Singapore became a free island city-state in 1965, and since then, its economic growth has been fuelled in an unprecedented manner. While a majority of residents are Singaporeans, it also has people hailing from many other ethnicities. There are four official languages- Chinese, Tamil, Malay and English. The cultural diversity and enticing cuisine of Singapore are major factors behind its emergence as a happening travel destination. Tourism has been and still is a major contributor to its economy. Many agencies like Travotic Holidays offer customized Singapore travel packages yearlong.

Enjoy the Diverse Climate of Singapore

Singapore’s climate is somewhat different from many of the adjacent Asian countries. The notable thing is in the island; it is hard to experience clear-cut seasons. Before booking any Singapore tour package, you have to think of the two monsoon seasons that are segregated by an inter-monsoonal period. December to early March is the phase for the Northeast Monsoon, while the Southwest Monsoon lasts from June to September. Monsoon surges denote strong wind episodes in the Northeast Monsoon phase that brings heavy showers. The average daily temperature hovers between 25 to 31 degrees Celsius, and during summer and monsoon months, thunderstorms take place quite often. While the showers are frequent, there is no denying they offer somewhat relief from the high humidity and scorching sun.

Despite the prevalence of monsoon phases, Singapore sometimes gets covered by a smoke haze, and that is owing to forest fires occurring in Indonesia. The high humidity level is unavoidable when you are indulging in a Singapore trip. So, tourists are advised to wear light, cotton attires. This is what the natives do too. Carrying rain gears like an umbrella is quite prudent as you never know when the sunny scene will be replaced by a sudden shower.

The early fall and late summer months are ideal for planning your Singapore cruise package. In these months, the weather is not much extreme, and you may find better accommodation deals. Get in touch with Travotic holidays to get the best Singapore holiday packages.

When you are in your Singapore trip, you have to use SGD– the Singapore Dollar. If you are visiting for the first time, you can use it for calculating Singapore trip cost per person from India.

Common Religion and Culture of Singapore

The lion city is regarded as the proverbial melting pot of cultures, with people hailing from many religions co-existing peacefully over decades. In Singapore, Buddhism is the most predominant religion, and the numerous Buddhist temples bear testimony to this fact. It is followed by religions like Islam, Christianity, Hinduism, Taoism etc. As per the finding of a 2000 census, more than 40% of Singaporeans adhere to Buddhism, and almost 15% are Muslims. Nearly 15% of the residents do not abide by any specific religion on the island. Christians comprise 14.6% of the population.

There is no state-regulated religion, and citizens are free to pick their religious paths. Interestingly, in Singapore, all three sects of Buddhism co-exist, namely Vajrayana, Theravada, and Mahayana. Taoism is another big and popular religion in Singapore- introduced by Lao Tzu- a famous Chinese philosopher.

You will also find a number of mosques and Hindu temples in the city. The oldest Hindu temple called, Mariamman Temple, is a tourist hotspot and ensure your Singapore tour package covers this one. There are several ancient and popular churches in the island city, and the oldest one is called the Armenian Church. You will find both Catholic and Protestant sects in Singapore. Some of the popular churches are the Church of St. Teresa and St Joseph’s Church.

Owing to the co-existence of people hailing from so many religious cults and sects in Singapore, the city witnesses a number of colourful and enticing religious festivals and events yearlong. Interestingly, a section of natives take part in these festivals, but they do not admit affiliation to any one religion.

In Singapore, the flow of tourists never slows down as it is. However, it is better that you plan a Singapore travel between December and June. The period is when you get a lot of sunshine, but the rainfall and humidity are on the lower side.

How to Reach Singapore?

There are different ways to reach Singapore from India. When you book Singapore packages from Travotic Holidays, you will get different options to visit the country.

To travel to Singapore from India, you can take a flight as it is the widely used transit option for foreign tourists. Most international airlines fly from India to Singapore nonstop or with breaks. From Indian cities like Delhi, Mumbai and Kolkata, you get director interconnecting flights to Singapore nowadays. Some domestic Indian airlines have also started offering low-cost Singapore Flights. The nonstop flight takes approx. 4-5 hours, and Changi Airport in Singapore is the most preferred flight destination, covered by most Singapore packages.

This airport is located in the island’s eastern region, and it is regarded as one of the finest airports. If you are planning for Singapore travel from India, keep in mind that different flights to Singapore can cost you more in months like July and August and also during year-end.  It is best to book your Singapore holiday packages from Travotic Holidays in advance to get customized and low price package.

Those with big wallets can cruise to Singapore from India. Luxury cruise liners operate from many Asian countries.

If you are keen to travel to Singapore from India using customized package options, Travotic Holidays is there to help you. Book your package now and enjoy your trip.

the world’s first nocturnal wildlife park, is a 13-time winner of the Best Attraction category awarded by the Singapore Tourism Board. This internationally acclaimed leisure attraction embodies innovation and creativity in products and services, and service quality, thus attracting approximately 1.3 million visitors annually. Close to 900 animals from approximately 100 species (of which almost 41 percent are threatened) inhabit the 35-hectare park.

Asia’s largest bird park, offering a 20.2-hectare hillside haven for close to 3,500 birds across 400 species, of which 20 percent are threatened. The bird park is famed for its large and immersive walk-in aviaries such as Lory Loft and the recently revamped Waterfall Aviary. Other unique exhibits include Penguin Coast and Pelican Cove.

Sentosa Development Corporation (SDC) has unveiled exciting possibilities for Sentosa and Pulau Brani as part of a landmark Master Plan to redevelop the two islands into a game-changing leisure and tourism destination, leveraging their unique island charm, geographical qualities, as well as proximity to the city.

Located 57 story’s up from the heart of the Marina Bay area, the Sands Sky Park Observation Deck boasts scenic views of the panoramic vistas of Marina Bay and Singapore’s world-class cityscape.

Garden by the Bay

The Gardens is led by a multidisciplinary team of professionals who have been involved in the greening of Singapore and had worked alongside international and local experts to develop the Gardens. It has an in-house team of skilled landscape designers, horticulturists, arborists, engineers, plant health, garden and turf management experts, as well as plant research and orchid breeding professionals, who leverage the extensive global network of plant sources cultivated during the development days, to continuously curate and grow the Gardens.

Singapore’s only movie-theme park features 24 rides and attractions, including a pair of dueling coasters that brush past one another in several near misses in their aerial combat. Thrill-seekers can choose between a coaster where they are seated or the other where riders are suspended. Exciting loops, sudden turns, breathtaking drops, and thrilling near-collisions will make you scream your heart out.

Singapore Flyer is Asia’s Largest Giant Observation Wheel. Standing at a stunning 165m from the ground, the Flyer offers you breathtaking, panoramic views of Marina Bay and beyond. There’s also a range of shops, restaurants, and facilities.

10 Most Amazing Facts of Singapore

Must Maintain In  Singapore Tour Package :

SOME CANCELLATION AND REFUND POLICIES ARE OUT OF OUR TENDER:

SEE ALL REVIEWS
DO YOU NEED MORE INFORMATION?
BOOK YOUR TRAVEL
Please fill up to get a call from our Travel Consultant
No, thank you. I do not want.
100% secure your website.
Powered by